On April 15th, 2013, two bombs were set off during the Boston Marathon killing 3 people, and injuring over 250 others. Although the tragedy of lives lost can’t be understated, there were also lasting effects that impacted surrounding businesses – with over $2.5 million in property damages claimed. Although the Property & Casualty (P&C) damages were great, the events were not certified as an act of terrorism, according to insurance standards, by the U.S. government. Damages didn’t exceed $5 million; a requirement of the Terrorism Risk Insurance Act.

After the terrorist attacks of September 11th, the American government passed the Terrorism Risk Insurance Act (TRIA) in 2002. Later amended by President Obama as Terrorism Risk Insurance Program Reauthorization Act of 2015 (TRIPRA), the Act “ensures the continued financial capacity of insurers to provide coverage for risks from terrorism by creating a federal backstop for terror-related insurance claims and mandates that commercial insurers offer coverage for terrorism on similar terms, amounts, and other coverage limitation applicable to losses incurred from other insured events.”

Under TRIPRA, an act of terrorism requires formal certification as such by the Departments of State, Treasury, and Justice.  In order to avoid uninsured losses, many turn to other insurance coverage solutions, such as a Worldwide Terrorism insurance – which is currently offered by Falvey Cargo Underwriting. Below, we’ve outlined what Worldwide Terrorism insurance provides as well as what’s required to be insured through TRIPRA. 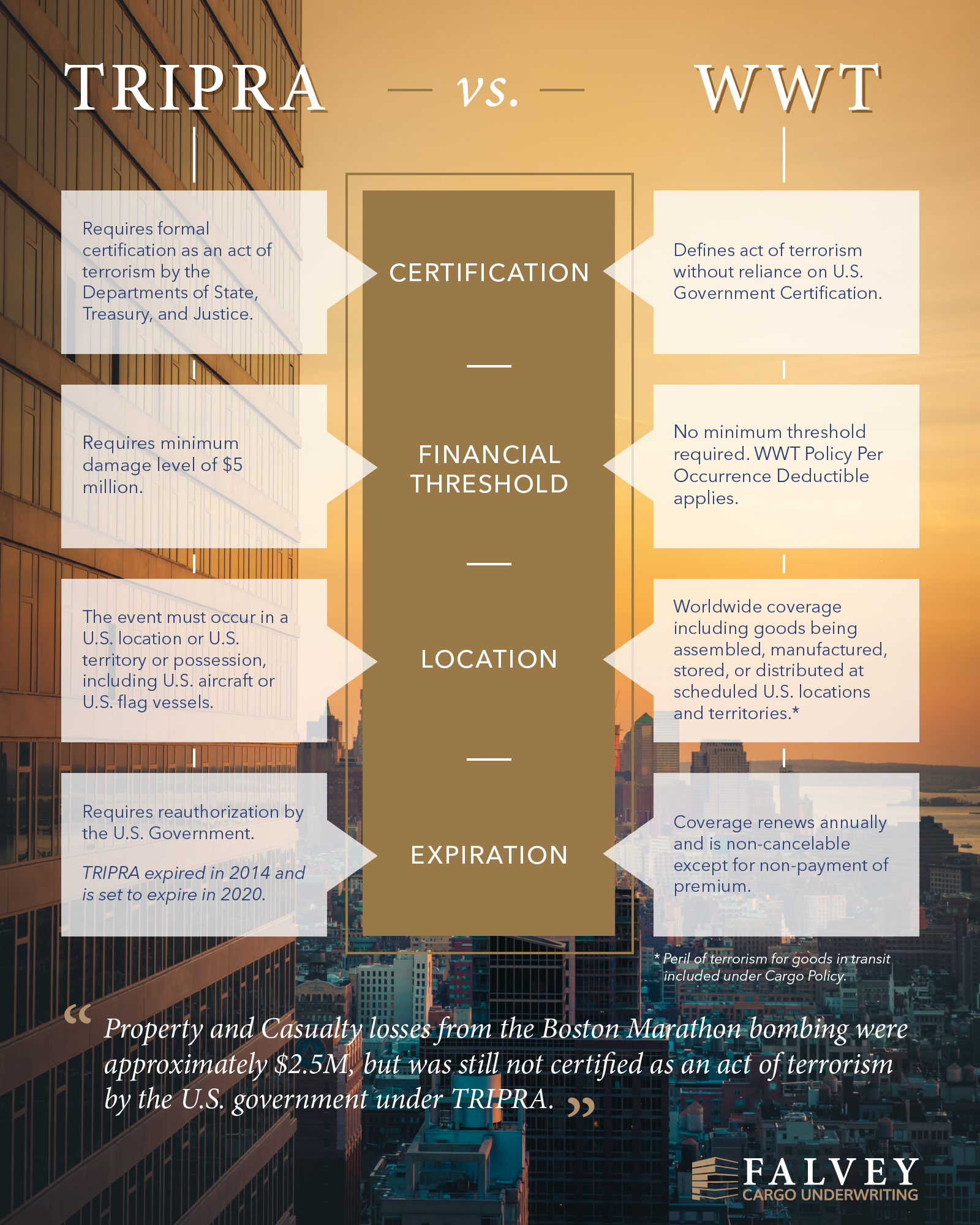 Since its inception in 2002, TRIPRA has been amended several times with changes to what is considered a terrorist act, the parties responsible for certifying an act of terrorism, and the required financial thresholds. Under TRIPRA, there are certain criteria to be met before a loss is indemnified. The first of which is a minimum damage level of $5 million. Secondly, the event must be officially certified by the government as an act of terrorism, which is determined by the Secretary of the Treasury and the Attorney General, as well as the U.S. Secretary of Homeland Security. Lastly, the event must occur in a U.S. location or U.S. territory or possession. Once these conditions have been met, a claimant will receive compensation only when the program trigger is reached in a calendar year – which was added to the act in 2015. The provisions of TRIPRA and the act’s level of specificity makes it challenging for those who have been affected to receive funds. In fact, under TRIPRA, no certified acts of terrorism have taken place.

Unlike TRIPRA, Worldwide Terrorism coverage defines what a terrorist act is rather than relying on the government for certification. What’s more, there’s no minimum threshold required to file a claim and is insured up to the scheduled location limit.  Another important benefit of a Worldwide Terrorism policy is that coverage is non-cancelable except for non-payment of premium.  TRIPRA requires reauthorization by the U.S. Government. For example, in 2014 the Act expired and clients who purchased TRIPRA were left uninsured until the Act was reauthorized in 2015. TRIPRA is due to expire again in 2020. A.M. Best Co. recently commented in Business Insurance, “The lack of permanency and the decline in protection provided to the (re)insurance industry at each (Terrorist Risk Insurance Program Reauthorization Act) renewal remains a major insurance industry concern.”

Falvey clients’ operations and supply chains do not stop at U.S. border so our coverage extends beyond U.S. borders and covers goods insured at worldwide scheduled locations. Falvey’s Worldwide Terrorism insurance covers goods while they’re being assembled, manufactured, stored, and distributed in their scheduled locations – meaning a much broader scope of this type of coverage.