Potential Loss Situation for the M/V ONE APUS

On November 30, 2020, the containership M/V ONE APUS suffered a collapse of the container stacks onboard resulting in what is potentially one of the largest losses in container shipping operations outside of any total loss. Being such a recent and ongoing development, information continues to flood in, but the carrier has at this point confirmed that 1,816 containers have been lost overboard including 64 containers declared as dangerous goods shipments. 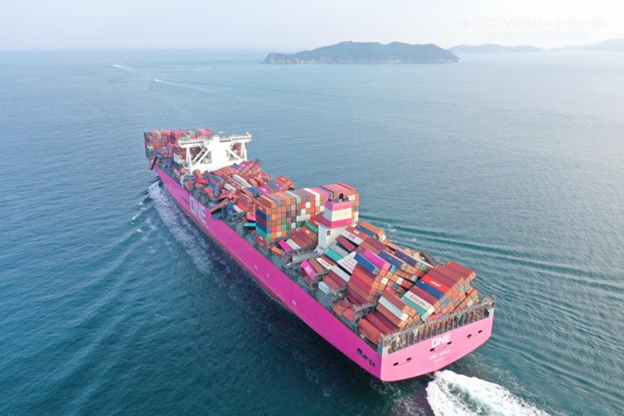 The 14,000 TEU vessel was on route from Yantian, China to Long Beach, California when it hit inclement weather. This was reported as wind force 4 on the Beaufort Wind Scale which typically is classified as 13 – 18 mph winds and 15-20 foot swells, however weather maps around the time of the incident indicate seas of up to 50 feet.

After the collapse of the stack due to rough seas, the Japanese flagged vessel abandoned its route and proceeded to sail to the nearby safe port of Kobe, Japan. The vessel is currently berthed at Kobe and undergoing operations to remove the damaged and collapsed containers. Because the container stacks have toppled, conventional unloading methods using gantry cranes are not possible for all the cargo, and other, slower and more difficult methods must be utilized. It is expected that the unloading process may take more than one month for all the containers to be carefully handled. Once the damaged containers are unloaded, they will be placed in the container yard at the port for inspection. Eric Newman, Senior Vice President of ProTecht Loss Prevention, says “We expect there will be a mix of outcomes – badly damaged containers/cargo may be disposed of locally; it may be possible to achieve some value by salvage sales; some cargo may be trans-loaded into sound containers and forwarded to destination, some containers may be undamaged and be suitable for on-carriage ‘as is’.”

A spokesperson for W.K. Webster had this to say about the extent of observable physical damage to the containers onboard: “It can be seen that there are 22 bays on deck of which 16 have collapsed to both port and starboard, leaving only 6 intact / partially intact. With 20 rows of containers per bay and with stack heights of between 6 and 8 containers, we anticipate that approximately 2,250 containers have been lost overboard or damaged. It will also be noted that the vast majority appear to be 40-foot units and therefore equivalent to approximately 4,500 TEU.”

What comes next will be a process of claims, surveys, and communications between involved parties. No cargo was intentionally sacrificed in order to save the ship, so in the case of general average (GA), containers lost overboard should not be included in GA payout. This will spare insured parties the lengthy process of GA claims and allow assureds to receive the appropriate claims settlements as fast as possible and be made whole so as to resume business. No GA claim has been made by the vessel as of the time of writing, however costs associated with a GA claim would include the following: deviation costs to Japan, fuel, wages, provisions, port of refuge costs, discharging costs, storage costs and some on-forwarding costs.

This recent incident involving the ONE APUS highlights the increased hazards involved with shipping cargo via containerized ocean freight, especially with the recent increase in the size and capacity of these cellular container vessels, referred to as ultra-large container vessels (ULCVs).

These incidents continue to draw attention to the lashing and securing methods utilized onboard these ULCVs and what other loss prevention measures can be taken to mitigate risk to these containerized cargoes when heavy weather is encountered at sea. One issue that will be scrutinized closely during the ONE APUS investigation is whether the vessel strictly followed the vessel’s cargo securing manual (CSM) which provides guidance on the proper stowage and securing of cargo. Under the 1974 SOLAS Convention, cargo units and cargo transport units (e.g containers) are required to be loaded, stowed and secured throughout the voyage in accordance with a CSM approved by the Flag State Administration and drawn up to a standard at least equivalent to the guidelines developed by the International Maritime Organization (IMO).

Read developing updates regarding the M/V ONE APUS, here.

A quarterly newsletter developed by our ProTecht Risk Solutions team, which provides insights on the latest trends affecting the cargo industry.